The faunal collection from Shkarat Msaied includes a wide variety of species. However, only a part of this collection has been analyzed at present. The analyzed material includes the majority of the faunal material of the collection from the excavation seasons of 1999 and 2000, which amount to 15923 fragments (weight 41791 grams). The areas of excavation from these two seasons include a variety of units, including open areas, several housing units of varying size and probably also function.

The main part of the material studied consist of goat ( Capra sp.) and sheep ( Ovis sp.) fragments, where goat is the dominating element (approximately 6:1). The evidence for the status of sheep and goat are not clear at present. However, the measurements would indicate a higher number of smaller animals or females, therefore probably a domesticated population or at least selective killing (see Zeder and Hesse 2000). Wild goat ( Capra aegagrus ) was, however, also present at the site, as the presence of 2 horn cores clearly indicate. None of the other possible domesticates, cattle ( Bos sp.) and pig ( Sus sp.), reveal evidence suggesting that these were near or fully domesticated. As for the Canis sp. fragments, they are too few and fragmented to determine whether they originated from a medium size dog ( Canis familiaris ) or from an Arabian wolf ( Canis l. arabs ).

A number of wild species have been identified at Shkarat Msaied ; these include a variety of carnivores, such as various foxes ( Vulpes sp.), where red fox ( Vulpes vulpes) is the most numerous, leopard (Panthera pardus ), badger ( Meles meles ), stone marten ( Martes foina ) and wild cat ( Felis silvestris ). Additionally, fragments from cape hare ( Lepus capensis ) and hyrax ( Procavia capensis ) are also present. Apart from a few butchering marks found on fox and hare, these animals appear to have been primarily utilized for their fur, as indicated by some skinning marks and a lack of meat carrying bones. This is especially clear for the two large carnivores badger and leopard, where only metapodiums and phalanges have been found. The wide variety of mammal carnivores could be seen as consistent with the pattern observed at the LPPNB site of Ba´ja (von den Driesch et al. in press). And to a certain extent also at the MPPNB site of Beidha, both located in the Petra region, however, the range of animals utilised at Beidha is somewhat more limited especially for the larger carnivores as both badger and leopard is absent (Hecker 1975: 471).

A number of avian fragments were found at Shkarat Msaied . This could be seen as consistent with the pattern observed at other PPN sites where a relatively broad spectre of species is utilised, including avian fauna (Tchernov, 1993). Of the 300 fragments found at Shkarat Msaied 153 were identified to family, genus or species. Apart from 5 fragments identified as rock pigeon, raven and partridge, all fragments belong to raptors (97% of the identified avifaunal material). These raptors include a number of eagles, vultures, buzzards and kites. The possible use of these animals is indicated by the distribution of skeleton elements, as 90% of the fragments found are from bones in the wing and leg. Although the bones of the scull are often found in lesser number due to poor preservation, this does not hold true for most of the bones in the body and the girdle. The distribution seen here clearly suggests that the raptors were utilised for another purpose than purely nutritional and can be compared to other finds at sites like Netiv Hagdud (Tchernov, 1993). Whether this use was of a functional purpose as tools, fanes etc. or whether they served a more ritual purpose remains to be seen.

The general collection suggest a broad based subsistence pattern where a large number of species were utilised, but with a heavy reliance on especially goat, probably in a domesticated form.

Bangsgaard, P. 2008. An introduction to faunal remains and environmental studies: A mismatch or match made in heaven? In Marchetti, N & Thuesen I. (eds.) ARCHAIA Case studies on research planning, characterisation, conservation and management of archaeological sites. Bar Int. Ser. 1877: 231-237

Bangsgaard Jensen, P. 2005. An Analysis of the Faunal Material from the MPPNB site of Shaqarat Masiad in Southern Jordan. MS thesis, University of Copenhagen.

Nielsen, P., 2014. Just another bone tool or an open window to the social organisation of production in the PPNB? An analysis of the bone industry from Shkarat Msaied (MPPNB). MS thesis/speciale, University of Copenhagen.

Nielsen, P., 2009. Worked bones in the Pre-Pottery Neolithic B (PPNB) from the Southern Levant. An analysis and comparison of the bone industries of the two sites Middle PPNB Shakarat Masiad and Late PPNB site Ba'ja. MA thesis. The University of Edinburgh. 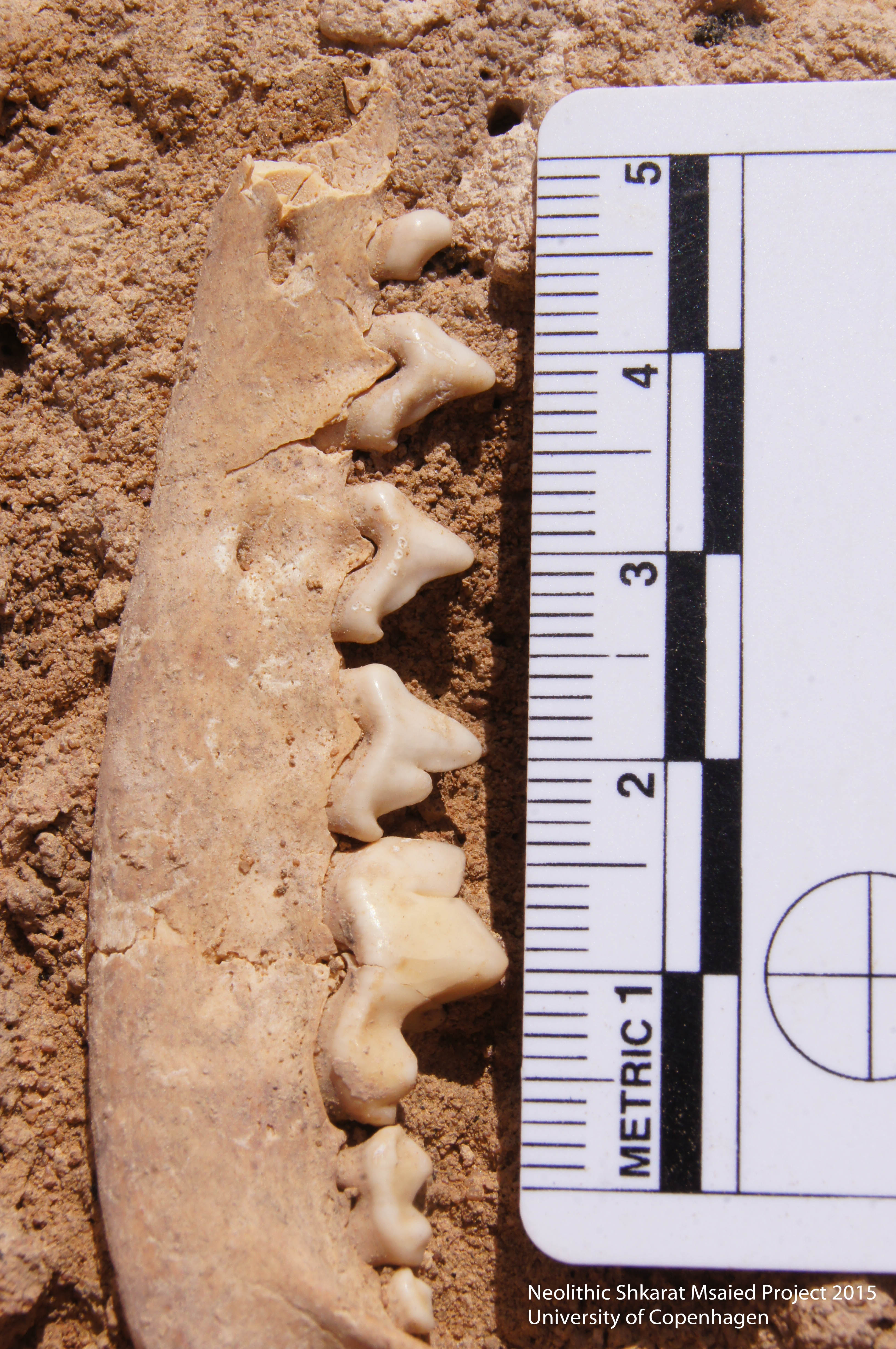