Most of the bone implements are various pointed implements (107 implements), and many of the pointed implements are made from metapodials and long bones, this is very common for many Neolithic sites in the region. Often either the proximal or distal epiphysis (ends of a bone) is kept as a handle or for a better grip. One of the pointed implements made from a metapodium, has been perforated near the tip of the implement. This is quite an unusual tool and might be related either to its use or for another specific purpose such as storage or transport (if a string was put through the perforated hole). A small needle (Length 53,90 mm) has also been found and this needle displays a perforation technique which has not been observed in the MPPNB in the southern part of the Levant before. Needles of Mureybet have previously been found only in the Southern Levant in LPPNB sites (Le Dosseur 2010), but Shkarat Msaied also produced Needles of Mureybet, maybe as one of the first to use this technique in the Southern part of the Levant in the MPPNB.

The splitting of the bones, mainly long bones, was done with various techniques. There is evidence of the groove-and-splitter technique, but also more simple techniques seem to have been used, leaving the result of the splitting of the bone with uneven and not straight sides. One long (just over 18 cm) pointed implement made from a tibia from goat, has been split in such a way that almost the entire length of the tibia was kept.

Bone as a raw material seems to have been preferred for a various set of tasks. Even though most of the bones implements found at Shkārat Msaied can be characterised as pointed or flat implements, other implements show a high degree of variation in size and shape; a small pounder-like implement (#121) and bevel-ended implements in various sizes and shapes are also present.

Beads made from bones are also found in Shkarat Msaied, both tabular beads, which are made from long bones from smaller mammals like hare or foxes. The technique used to create these tabular beads is quite simple. The epiphyses were cut of at each end of the long bone and area where the bone was cut was then abraded to a smooth surface. One figurine made from a rib, probably from cattle was found in a bone bag. The figurine imitates a human being (Jensen et al. 2005). Also half a pendent like implement has been carved in a way that looks like a face of a human being.

There is a tendency in the assemblage that the most of the implements is made from medium sized animals like goat or gazelle. This corresponds well with the unworked faunal material found at Shkarat Msaied, which is dominated by caprines and a smaller amount of gazelle. Most of the bones of the animals were used in the production of bone implements. There was a preference for ribs, especially for flat implements, and most of the pointed implements were made from long bones and tibia and metapodials were the most frequently used. However it will have to be taken into consideration that due to the manufacture and use of the bone implements it is often impossible to differentiate between the various anatomical parts of the bones and species.

It has been possible to locate the find context of 210 of the 308 bone implements. More than 75 % of the bone implements have been found in the southern part of the site. 60 of the bone implements are found in unit P this unit also contain a high amount of other finds like ground stone tools (Harpelund 2011) and molluscs (Abu-Laban 2010). Until now the context analysis does not show any specific patterns of a distribution which can be related to types or function of the implements. Also it has not been possible with the results obtained until now to find evidence for workshops, neither for the production of bone implements or other workshops which would have involved tools made from bone. An analysis of the fragmentation pattern might provide evidence for where the production took place and to what extent the bones from animals were used as part of the daily life in the MPPNB.

Abu Laban, A 2010, Exchange systems in Levantine Middle Pre-Pottery Neolithic B societies – An analysis and reconstruction of the use of mollusc shells from the Southern Jordanian site Shkarat Msaied. Unpublished Master Thesis, Carsten Niebuhr Institute, University of Copenhagen, Copenhagen. 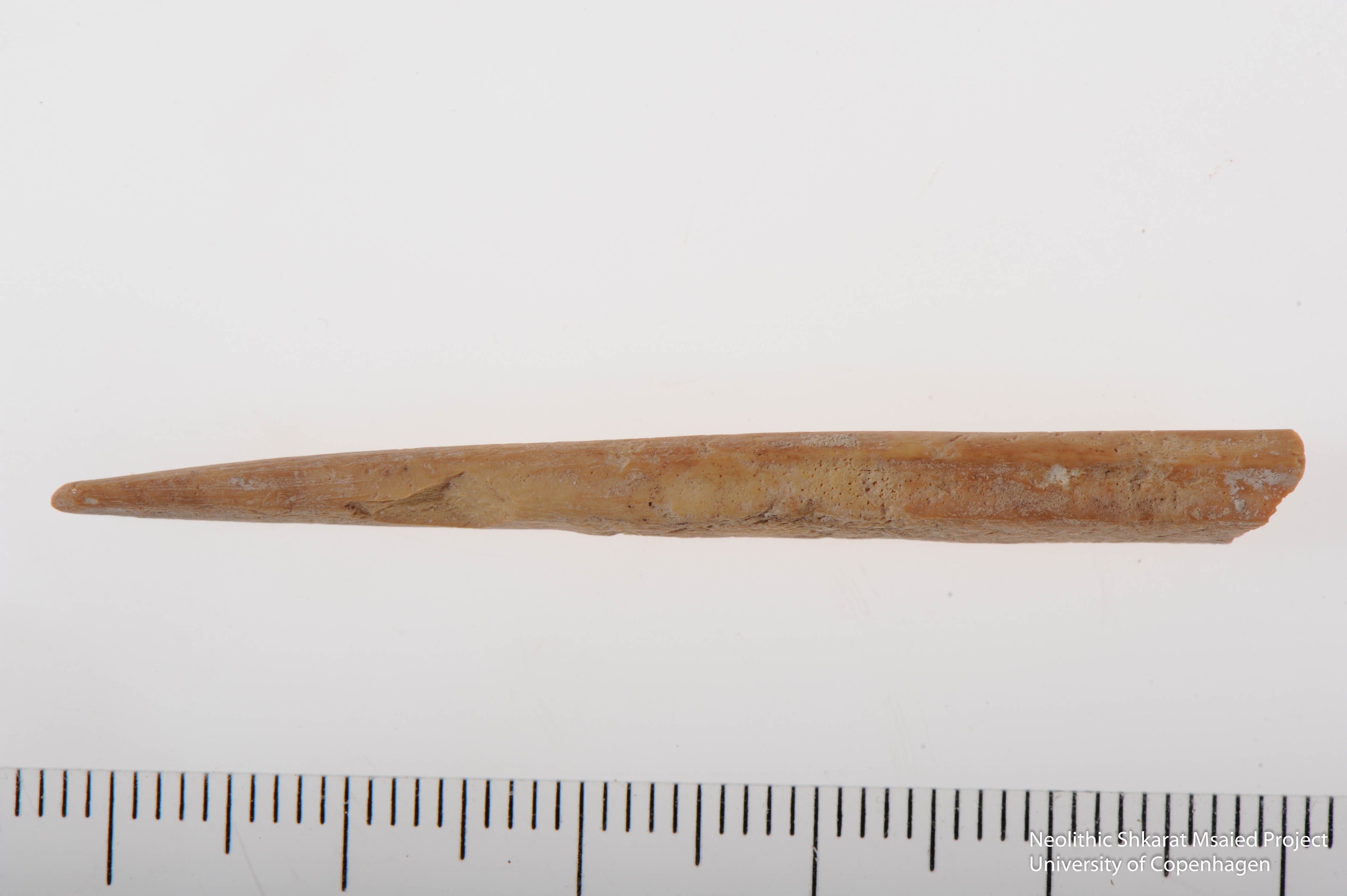